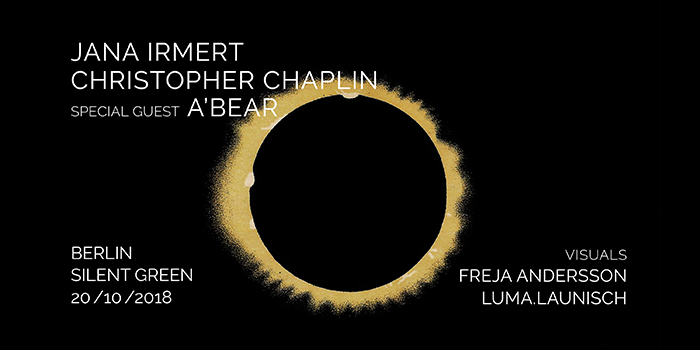 Jana Irmert is an acclaimed Berlin based sound and media artist. Being interested in the vague, irrational, less tangible aspects of existence, she translates inner images into atmospheric audiovisual or sonic spaces that invite the listener to connect with them. Having produced both solo pieces and numerous collaborations, her work features electroacoustic multichannel compositions, audiovisual installations and joint projects with filmmakers, dancers and visual artists. Her compositions and installations have been presented at international festivals and exhibitions such as the New York City Electroacoustic Music Festival, Sound Explicit (Slovenia), the I-Park Environmental Arts Biennale (USA), the Academy of Arts Berlin and the Banff Centre (Canada).

Jana Irmert’s debut album End of Absence was released in 2016 followed by various great radio features and reviews around the globe. One of the album tracks has also been selected for the European Soundart Award 2016 exhibition. In 2017 Jana Irmert has been invited by British avantgarde composer Christopher James Chaplin to rework his epic piece Aelia Laelia. Her impressive new version has later been included on Chaplin's versatile and experimental Deconstructed Remix EP.

Jana Irmert's new solo album FLOOD is based on a monumental quadraphonic work and has been released in Summer 2018 on Fabrique Records. "Jana Irmert has created a metaphoric world of billowing harmonic clouds, gently crackling sounds and abstracted field recordings. All three parts of the album are marked by perpetual subtle shifts, memory turning into an imperfect compass: You can walk through the music in all directions without ever passing the same point twice. Inside this world of concrete sounds and pure abstractions, of organic timbres and alien noises, all sense of perspective is lost: What is far can seem close, tiny sounds suddenly appear enormous. In a sense, FLOOD is about the desire for change, a sensation that fills us both with anticipation and anxiety. That is why this album is more than just a sonic novel, and why there is more than one story to it - just enter the flood and allow the current to carry you far, far away“ (by Tobias Fischer).

"’Paradise Lost' is the second album by London-based musician and composer Christopher James Chaplin. Following 'Je suis le Ténébreux' (2016), 'Paradise Lost' condenses experimental electronics into a chamber music setting, once again transporting us to intermediate mental and spatiotemporal states. This album features the voices of Nathan Vale and Leslie Winer. Vale is a British tenor and reciter, who specializes in baroque singing. The US musician, poet and artist Winer is almost his counterpart: Jean-Paul Gaultier described her as the first androgynous model, and she has worked with Sinéad O'Connor, Grace Jones and Helmut Lang, among others.

Whereas 'Je suis le Ténébreux' was an artistic interpretation of Gérard de Nerval's poem of the same name, and of the 'Enigma of Bologna', Christopher Chaplin's new album translates John Milton's poem about the descent to hell of fallen angels into epic soundscapes. Nothing is clearly structured - instead we find ourselves in a dreamlike state of limbo. Moments of turbulence transform into musical states that collapse, roam through space, or grow into complex structures. It is a music of dark shimmering poetry that thrives on its own ambiguity“ (by Heinrich Deisl, 2018).

British composer and experimental music artist Christopher James Chaplin studied piano with Irene Denereaz in Vevey (Switzerland) before moving to London in the early eighties. In 2009 he was invited by Viennese electronic music label Fabrique Records to collaborate with Kava on “Seven Echoes”, a concept album released and presented live at the well-known Art Brut Museum Gugging in Austria for the first time. There he met electronic music pioneer Hans-Joachim Roedelius (Cluster, Harmonia) who later invited Christopher to take part in a Late Junction live session for BBC Radio 3. The result of this second collaboration eventually led to another collaboration album. In the years that followed Chaplin and Roedelius performed around the world; these were largely improvised performances with Roedelius on piano and electronics, and Chaplin on synthesizers and orchestral samples.  October 2016 finally saw the release of Christopher Chaplin's highly acclaimed solo album debut 'Je suis le Ténébreux', which had been partly recorded at Air's legendary Atlas Studio in Paris and various studios in the UK. It weaves experimental musical influences around a sixteenth century text, an epitaph known as the Enigma of Bologna.

For Christopher Chaplin's solo live shows the music is echoed by the fascinating projections of visual artists Luma.Launisch – assembled and processed in real time.

A'Bear is a multi-continental Avant Synth pop artist based in London. Twisted rhythms and wonkly vocal loops are of the basis of the quirk pop synth producer. Inspired mostly by romance and the cosmos her music production delves deep and goes boldly to often far out places and warps its way back somewhere between that fine line of pleasure and pain. Freshly squeezed, full flavoured and oozing a unique drop of dream like synth pop polyrhythms for those in need of a thirst quench.

Her recent releases include Florida based label Elestial sound and the Russian Experimental label Система.