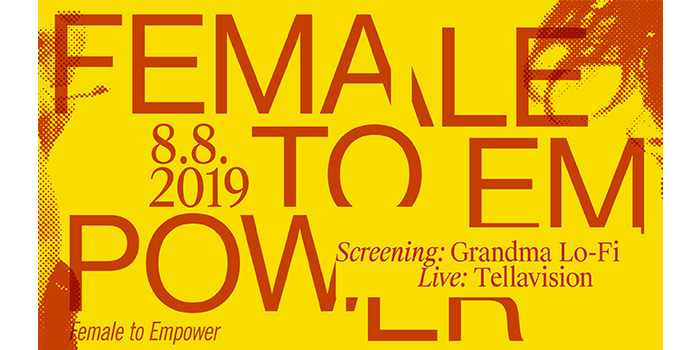 This charming documentary, filmed mainly on Super-8, is dedicated to Sigrídur Níelsdóttir, the great old lady of Icelandic music. Although she made music all her life, she only began to record it late. When she produced her first album on cassette at the age of 71 in 2001, her self-made avant-garde "kitchen music" with keyboard and household items quickly became a cult in Iceland. From then on nobody could stop her: To date Sigrídur has recorded over 600 songs and 59(!) albums at home.

For a decade Tellavision has been one of our most exciting sonic inventors, carving out her own inimitable style through her previous three albums, two EPs and countless tracks. New music abstractions echo against a backdrop of old Krautrock mechanical-motorik rhythms, allied to the physically gripping immediacy of techno and noise. Her concerts have consistently been nothing less than spectacular: she has sung and sampled beats from every imaginable and unimaginable variety of live percussion instruments; a loop station virtuoso, an engineer of a technically crafted musical "i" in which the innate and the alien mirror one another ad infinitum.

About Female To Empower:

Female composers, DJs and producers have always been part of the musical present. However, in the great, male-dominated narratives of music history they are still hardly mentioned today. The concert and film series Female to Empower therefore wants to tell the barely heard small and big stories of music from an exclusively female perspective.
To this end, Female to Empower combines music documentaries with live concerts in order not only to provide a historical-documentary retrospective, but also to take a contemporary look at the musical work of women* in popular music.
The series immerses itself in the biographies and working environments of musical pioneers, who not only aim to be role models, but also to point out perspectives and strategies.