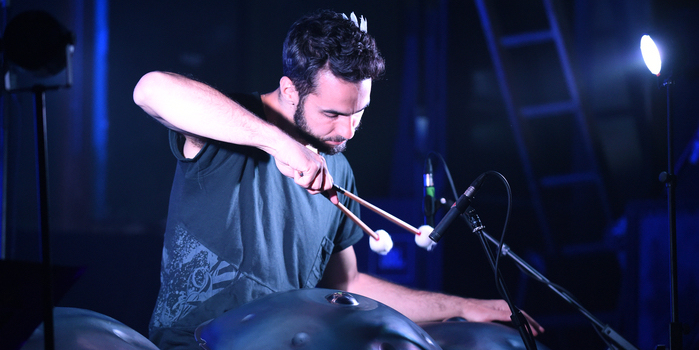 Manu Delago and his new ensemble present his new album Circadian. The Grammy nominated percussionist and composer takes us on an acoustic journey through the different sleep cycles. In addition to his fascination for the sleeprhythm of human beings, the musician also acoustically processed the lack of sleep he experienced through numerous tours with stars such as Björk, Olafur Arnalds, Cinematic Orchestra and Anoushka Shankar in his newest music tracks.

"It felt as if I was on the road with four bands at the same time and in my dreams the many music styles and different crews started to mix."

After his electronically-played predecessors Silver Kobalt and Metromonk, it's still the urban soundscapes that inspire the Austrian musician - but they're increasingly found in acoustic forms. The reasons for this are new percussive instruments, which he got to know on his concert tours in Vietnam, Russia, Turkey or Indonesia and the acoustic proximity of different instruments like clarinet and accordion to analog synthesizers.

In the year 2018, Manu Delago published his award-winning mountain and music film Parasol Peak.
The film shows a mountain expedition, which he undertook with his band in the Tyrolean Alps. Equipped with cello, trombone, trumpet and the percussion instrument Hang the band stopped at different points and heights, installed cameras and sound equipment and made music.

From bodyexperience, fellowship and mountain air to REM, subconsciousness and awakening. Even without an expedition Manu Delago, his ensemble and the music they are performing create an emotional event you shouldn't miss.