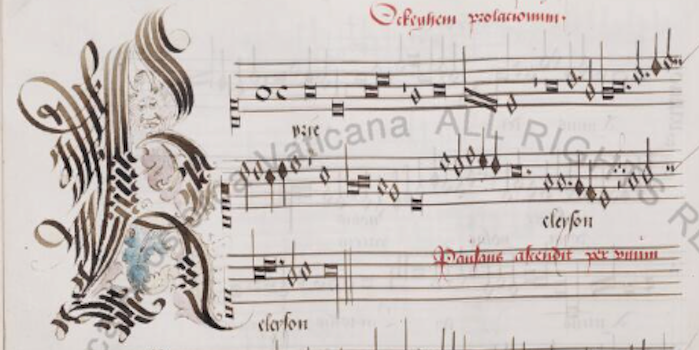 This is the third major project of the GOLDBERG-STIFTUNG Foundation. It is a kind of sounding philosophy of the time. Johannes Ockeghem's (ca. 1420 - 1496) Missa Prolationum is one of the most demanding and fascinating works in music history, comparable to Bach's Art of the Fugue.

The entire Mass is performed in canons, usually with two different pairs of canons. Another special feature is that in many cases all four voices begin together, as you can hear in our sound example on the first Kyrie. Although the voices are identical in pitch, they each move at different tempos through different bar markings (in the terminology of the time: Tempus and Prolatio). Only after a certain time do they no longer diverge further, caused by a reduction of the note values. One can almost speak of a premonition of the theory of relativity. The title of the project alludes to the technique of the "fugue" or canon, but also to the fact that this time technique seeks to stop the "fleeing time". As in Bach's Goldberg Variations (every third of these variations is a canon), the interval in which the voices are used also changes from prim to octave. Due to its horrendous difficulty, this mass is performed only very rarely. But the listener is also particularly fascinated and challenged by the unprecedented and still unique voice progressions. In the proven technique of Slow Listening, the complicated and hardly recognizable vocal progressions are made sensually perceptible and comprehensible. As a punctuation of the music, texts from antiquity to the present are recited on the theme of time-perception-music.

More information about the tickets can be found: here