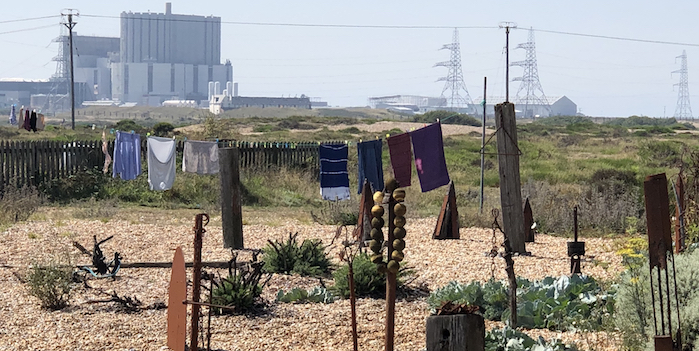 Collaborative Work and the Gaze of the Compound Eye

After a one-year break, Arsenal – Institut für Film und Videokunst is offering the Summer School again. Over the course of three days, 25 participants, staff members of silent green and the Arsenal, as well as invited guests, will explore topics at the interface of theory and practice.

This year the contributions and workshops are dedicated to the life and work of British filmmaker, artist and activist Derek Jarman. On the occasion of the exhibition project The Garden. Cinematics of the soil conceived by silent green Film Feld Forschung, Jarman’s film THE GARDEN, as well as his legendary garden Prospect Cottage, will be the starting point for a contemporary examination of essential questions of our society and its future: environmental pollution and disease, collectivity and resistance.

The presentations are partly in German language only.

Over the course of the day, this seminar will examine Derek Jarman’s way of working, how he made his films outside of the usual conventions of cinema, through collaboration and working friendships. Jarman's film The Garden and his actual garden will be examined form a variety of perspectives to help cast light on Jarman's art, writing, film-making and sexuality.
Working as a group, the discussions will be led by Annie Symons, costume designer; Peter Fillingham, artist; Howard Sooley, photographer; David Lewis, filmmaker; Simon Fisher Turner, composer; James Mackay, – all longstanding collaborators of Jarman’s – supported by Mary Katharine Tramontana, writer and poet and Alexandra Symons Sutcliffe, curator and writer.

Shown materials will include clips and photographs from the development of Jarman's garden at Prospect Cottage and the period of filming THE GARDEN as well as other relevant material. Throughout the event there will be ample opportunity to ask questions.

“Neither need you tell me,” said Candide, “that we must take care of our garden.”
“You are in the right,” said Pangloss; “for when man was put into the garden of Eden, it was with an intent to dress it; and this proves that man was not born to be idle.”
“Work then without disputing,” said Martin; “it is the only way to render life supportable.”

Pangloss used now and then to say to Candide: “There is a concatenation of all events in the best of possible worlds….”

“Excellently observed,” answered Candide; “but let us cultivate our garden.”

19:00, silent green
Dinner together at the Mars Restaurant (included in the fees)

What is film, which field, and where is the research going? On the basis of the exhibition project The Garden. Cinematics of the soil, the curators present the silent green project Film Field Research and discuss questions about contemporary documentary practice.

DNCB stands for Dinitrochlorobenzene. It is a yellowish crystalline compound chemical, which is highly toxic, and easily inflammable. It smells of almonds. DNCB is used in colour film processing in analogue photography.
In the mid ‘80s to mid ‘90s, the substance was also used as a treatment in alternative AIDS clinics around the US and Canada.
In the seminar Kerstin Schroedinger and Oliver Husain will tell the history of the transformation of a photo-chemical compound into a self-made medical treatment that was distributed among HIV/AIDS activist circles, while they will unfold their own research process

14:30–16:00, silent green
Listening to the Anthropocene
by Peter Cusack

We live in the anthropocene where daily events show the ever growing impact of human activity on geological and planetary scales. As well as the extreme weather, biodiversity loss and climate injustice that are constantly in the news, these impacts have sonic consequences. The anthropocene effects what we hear, both globally and in the familiar soundscapes of the places where we live. It is fascinating to listen to these changes. Hearing can give insights different from visual images, science and language and can add to our understanding of what is currently happening around us.

As a field recordist (and musician) with a long interest in the environment Peter Cusack has travelled to areas such as the Caspian oil fields and the disappearing Aral Sea in Central Asia where major human-caused environmental changes have already taken place. He also has many recordings and photographs from the places - Berlin, London - that for him are home. This talk/performance will aim to give a sonic perspective on the anthropocene by playing examples of these images and sounds.

Aromatic bitter compounds / phenols are hidden in tree bark, berries, tea and in your breakfast leftovers! They delight or frighten insects and convert silver salts into visible, metallic silver – the basis of black and white photography. A person's leftover food of one day makes exactly one liter of developer: a handful of photos or a three-minute film. How, what for and why, philosophical molecular thoughts plus delicious and vivid live developing!

Gardening
In a large-scale experiment, we detach Derek Jarman's film THE GARDEN from its classic screening context and transpose it as a film body onto 12 projections in the concrete hall of silent green, the former morgue of the Wedding crematorium.
At the foot of what was once forensic medicine, we dissect the film, we break it down into its component parts and try to get to the bottom of the complexity and structure of its work. We look for orientation, dig, rearrange, expose.
THE GARDEN - this garden cannot be seen from a fixed perspective. It wants to be experienced with all of the senses. We dive into the universe of Derek Jarman, embraced by the force and power of his work.
We set ourselves in motion to discover details, to tread hidden paths, to pave new ones. Everyone discovers and sees something different, we look for points of orientation, get lost in a wave of details and find ourselves again beyond the given coordinates of space and time.
The day ends, the film begins ...

„The gardener digs in another time, without past or future, beginning or end. A time that does not cleave the day with rush hours, lunch breaks, the last bus home. As you walk in the garden you pass into this time – the moment of entering can never be remembered. Around you the landscape lies transfigured. Here ist the Amen beyond the prayer.“

Participants and lecturers will discuss and reflect on the various thematic fields of this years summer school in the plenum.