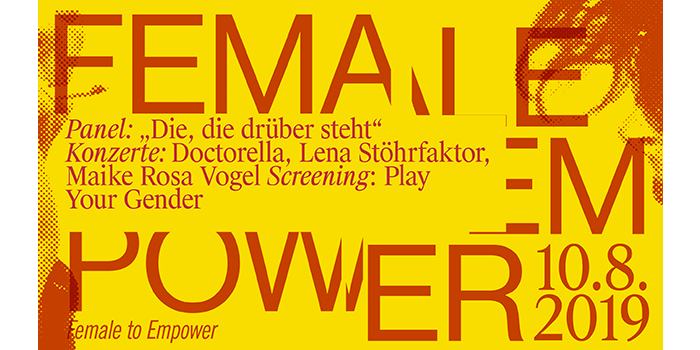 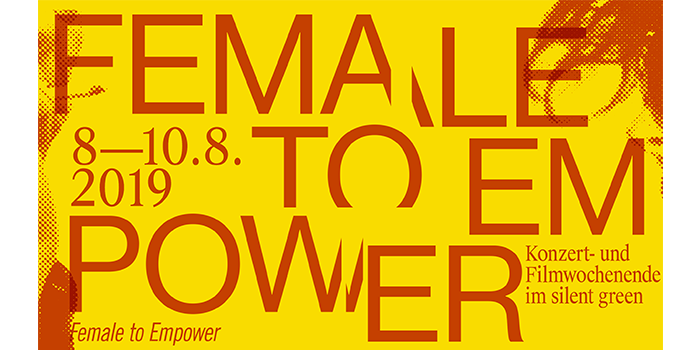 Female To Empower: Play Your Gender & Talk and Liveprogramme

Panel: “The woman above"
Female music journalists in talk.

Music journalists should not be underestimated for female* empowerment in the music scene: They claim power of definition in a male-dominated field, while they themselves are affected by everyday sexism. Kerstin and Sandra Grether therefore invite under the title "Die, die drübersteht" ("The woman above") to a cross-genre podium. They speak with Miriam Davoudvandi and Diviam Hoffmann about a life between nerd and fandom, about the support of musicians*, the great passion for music and at the same time reflection about sexism in the music business.

Diviam Hoffmann is deputy managing director of the radio station ByteFM and writes as a freelance author for taz, Deutschlandfunk, NDR and WDR about music, society and feminism.

With the aim of making "rap soft again" Miriam Davoudvandi has worked as chief editor for splash! Mag and as a freelance journalist for various other music magazines. She also advises labels, tours with her Lecture "I've got 99 problems but being a feminist listening to rap ain't one" and convinces as DJ Cashmiri with a selection in which Dancehall Queens shake hands with legends of German Rap and heartbreaking R&B meets dark Memphis Rap.

Kerstin & Sandra Grether are considered "pioneers of pop feminism in Germany." (TAZ).
The Grether sisters already became famous in the 1990s, when they set the style for the music magazine SPEX, partly because of their feminist manifestos. Currently they run the indie label Bohemian Strawberry Records (with a focus on female* artists), the blog ichbraucheeinegenie.deand are curators of the event series "Ich brauche eine Genie" and "Krawalle und Liebe".

Doctorella is the electro-rock chanson band of Kerstin & Sandra Grether. For Female To Empower they play old and new riot hits in a duo set.

Lena Stoehrfaktor has been playing her part in the barren hip hop landscape since 2004 and gained herself a name as rapping underground luminary in Berlin. Her lyrics provoke, as she likes to put her finger in social wounds. To date Lena has released three solo albums, three crew albums with Conexion Musical and proves her skills in various musical projects.

Maike Rosa Vogel has become one of the most important German-speaking protest singers* in this decade. Not least because of her strong songs that address social injustice she became the star and darling of the German indie scene overnight at the beginning of the 2010s. On her current album "Alles was ich will" the musician recorded (almost) all instruments herself, produced them herself and of course wrote, sang and texted everything herself.

Only six women have ever been nominated for the "Producer of the Year" Grammy since the first Grammy Awards in 1959, none have ever won it. This is in stark contrast to the number of women who are pop stars on the stage of the music business. Play Your Gender looks for an explanation for this extreme discrepancy in the music industry and conducts interviews with Sara Quinn (Tegan & Sara), Melissa Auf der Maur (Smashing Pumpkins) and Patty Schemel (Hole).

Female composers, DJs and producers are and have always been part of the musical present. However, in the great, male-dominated narratives of music history they are still hardly mentioned today. The concert and film series Female to Empower therefore wants to tell the barely heard small and big stories of music from an exclusively female perspective.

To this end, Female to Empower combines music documentaries with live concerts not only in order to provide a historical-documentary retrospective, but also to take a contemporary look at the musical work of women* in popular music.

The series immerses itself in the biographies and working environments of musical pioneers, who not only aim to be role models, but also to point out perspectives and strategies.